Finding this waterfall was an great local tip I received.  I was stunned with how amazing these waterfalls were! Grand Falls was created from a lava flow from a nearby Merriam Carter that flowed into the river and created a Lava Dam. Sometimes in life we have events that like this lava flow make us feel like we have been cut off, but just like this Waterfall, it is usually the hard times that redirect us that create more beauty than we could have even imagined.  Keep your head up, for every challenge we deal with well in this life is just helping us become more amazing!

Grand Falls is one of those falls that you must catch during Spring Run Off, or after a good storm, for there are times during the year that it can slow to a trickle.  I was very lucky and caught it on a pretty high flow day. For this reason it is best to try and see these falls during MARCH and APRIL so you can see them flowing.

I love following a local tip, but with following a tip created a few things I soon discovered that I was not really prepared for.


Some people call it a Chocolate Falls, for the faster the run off, the more mud that is in the water creating a almost brown waterfall on high run off days.   As you can see in the above video, the waterfall is definitely brown in color.  I really like how drones though can get such wonderful views of places like this waterfall.  Thanks Dennis Lazau for capturing some amazing views of this waterfall.

One of my favorite photos of this Waterfall was done by an amazing Photographer AO Tucker.  Below is one of his photos. He has a wonderful collection of fabulous photos on his website.  Definitely Check it out!
https://www.aotucker.com/

A Video of Grand Falls that I took while I was there.


A Video of Grand Falls that I took while I was there.

Some more Awesome Arial Footage of the Grand Falls


Interesting fact is that Grand Falls is 185 feet tall which is taller than Niagara Falls!

UPPER PROVO RIVER FALLS is one of my Favorite Waterfalls.  It has multiple sets of these short but beautiful waterfalls.  Wonderful Area.  Check it out in 360 Degrees. 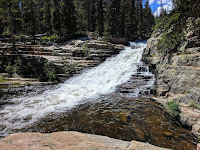 SCOUT FALLS is also one of the Waterfalls that is Best in the Spring, but so worth it! 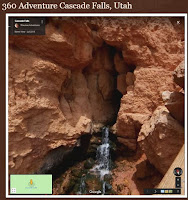 My hubby bought these handy phone pouches that are waterproof and you can use your phone while they are in the pouch.  They are great when you are out around water and want to keep your phone dry.