in Provo Canyon in 360 Degrees

Don't forget to move around so you can see it all. 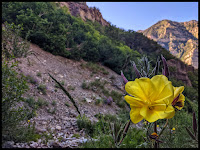 I chose to do Slide Canyon Waterfall Trail, for it was a Saturday morning, and I wanted a hike without a lot of people on it.  I definitely pick a winner on that account, for we were the only ones on this trail.  That being said, I don't think this trail is well know, for it was A LOT of bushwacking and quite a bit of time trying to decipher the trail.  I came to the hike with the mindset that this trail was named slide canyon because of the avalanche danger in this canyon from Oct to April, and is therefore closed to the public.  I left with a chuckle believing that it should also be known as a hike with an SLIDE.  You have to slide down to get into the ravine, and climb the slide up to get out of the ravine, no matter which of the trails you take in this canyon.  I do know this canyon has a waterfall, but at the time, both my Gaia maps, and Alltrails told us we were WAY passed the end of the trail, so we turned, but for those who don't minds creek walking and bushwhacking, there is an amazing waterfall up Slide canyon.
Some people will take this trail and hate it, for it is hard and tricky, and yes I will go through exactly why it is hard in a moment, but there are others who approach this as an adult natural "Chuck E Cheese" type obstacle course, and they will love it, for it has tunnels to climb through, deciphering to figure out, boulders to cross, and it is is not a boring trail.  It keeps you on your toes, and has a cute creek the whole way to add that natural ambiance to the hike. I would hike it before fall, for there are burrs growing along the trail right now that I hope get chopped down that will be NO FUN once fall comes, but June early July will be no problem.

Why is this Slide Canyon Waterfall Trail Hard?

TINY PLANET VERSION of Video Above.

2D Version of Video if you like that better.


We went just past these boulders above and lost the trail, so we turned around, but I really think that the waterfall is just up around that corner.  I think if I would have creek walked up that trail just a little, I would have seen a waterfall when I rounded the corner, and I hear the waterfalls are quite amazing because of the echo of the water off the rocks make it even louder than normal.

GoogleEarth Link of Waterfall up Slide Canyon
If you enjoyed this post, I think you will also love these waterfall hike that are also in this area.
Link to Lost Creek Falls - Provo Canyon
and

Summit Post has a Post on this trail with some cool insights and photos.  Check it out. One thing I thought was very interesting he mentioned is that if you hike this in mid May when there is snow from an avalanche, it is actually easier (especially if you are wearing spikes (Crampons), but you MUST stay on away from the middle of the canyon where the water is underneath for it could easily cave in and then it would be very dangerous.
Summit Posts Link to this Trail