Skip to main content
Showing posts from June, 2018
View all 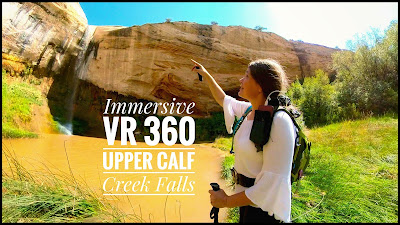 Immersive VR 360 Upper Calf Creek Falls UPPER CALF CREEK FALLS in 360 Degrees ESCALANTE, UTAH Life can be a rollercoaster of storms and then beautiful serene moments.  This VR 360 Nature Vacation is one of those wild rides.  We start at HellsBackbone Bridge in the Death Box Hollow Wilderness in Utah for some beautiful cliff views and watch an epic storm roll in.  It engulfed us, and we found ourselves surrounded with lightning, and an intense hail storm.  We then head to a bePine Lake that is surrounded by gorgeous red cliffs and pink lily pad flowers.   We move from there to the beautiful Upper Calf Creek Falls and see this beautiful waterfall from above and below, and then to Lake Barker in Dixie National Forest to catch a fish at a new lake making 40 different lakes we have caught at in our 100 lakes 100 fish goal.  Storms seemed to follow us on this adventure. Some storms can bring fear, but in reality this one was an answer to prayers.  Remember He is Good, and He wants to 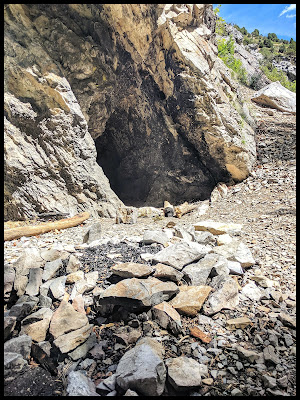 Rock Canyon Cave, Provo Utah 360 Adventure Rock Canyon Provo and Rock Canyon Cave VIDEO INSIDE ROCK CANYON CAVE.   . Rock Canyon is a canyon with crazy jagged cliffs and might not give the greatest first impression, but it is similar to many people in this way. This canyon is a treasure for those who chose to give it a chance. For those that give it a chance they find that the climbing, rappelling, hiking, biking, and other things it has to offer push them become stronger and a better version of themselves. I hope you can see the similarity in how giving people who don’t draw you in with their first impression might be a huge blessing in your life. It sure has been in mine. My favorite treasure here in the canyon is the cave. There are 2 other spots people think are the cave, but they are not, and I would be happy to share with you the real cave. Nice safe cave. Not too deep, just don’t try and go places that are blocked off, and make sure you have a great headlamp. Ama 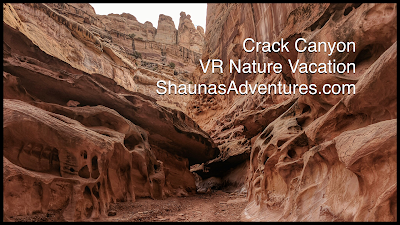 San Rafael Swell Slot Canyon Utah  2D Trailer Video for  Oculus TV  San Rafael Swell Slot Canyon VR Adventure Cracky Canyon San Rafael Swell  Virtual VR 360 Version for VR Headsets to Transport you Here Remember this is a 360 Video, so make sure you rotate it around.  The best way to view is in a VR Headset. Information about Crack_ Canyon 5 hours South of SLC - 1 hour min South of Bryce Canyon Great for ages 9 and above. Favorite Slot Canyon because of its uniqueness.    This can be a long 14 mile trail, but I have never gotten past a drop off where it is filled with water.  I always turn around there (about 3 miles).  About 700 feet elevation Easy Hike - Level 2 CrackCanyon in the San Rafael Swell is such a fun diverse slot canyon.  It is so worth the drive down to Southern Utah to see it, but let me give you some hints to have a successful trip. 2D Version of CrackCanyon with Sunrise. STEPS TO HAVE A SUCCESSFUL TRIP TO CRACK_CANYON First, while you are at home, 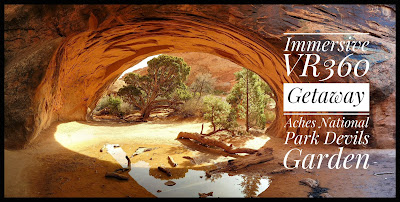 Navajo Arch in Arches National Park Dev.l's Garden Primitive Loop Double O Arch or D's Garden Primitive Loop Arches in 360 Degrees   If you have a little bit of an Adventuresome Spirit, then this is a trail you will absolutely LOVE.  It has is all.  Great get your heart rate up challenges without much real danger, amazing views that will definitely WOW you, and 9 unique and amazing natural arches all in one hike (2 are trickier to find so most find only 7).  It also is so interesting that it doesn't even feel that long even though it is 7.5 miles. If you can't make it here today, I have an Immersive VR360 Getaway version that is also awesome.  Just Grab a VR Headset, and transport yourself here. Just search ShaunasAdventures on OculusTV, YouTubeVR or use my Oculus Portfolio Link .  YouTubeVR Immersive VR 360 Nature Vacation Getaway to Arches National Park WALKING THE FINS!    This De..ls Garden Primitive Loop is quite the adventure and not for the Faint o 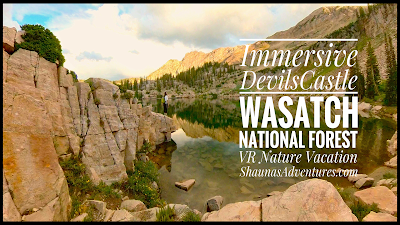 Immersive DevilsCastle & Cecret Lake Wildflowers for VR Headsets  Immersive D Castle  & Cecret Lake   Alta, Utah in 360 Degrees My adventures this week took me to DevilsCastle.  I knew it would be a hard hike, but when you hear it is hard, it is really nice to know why.  Some hikes that are marked hard are not hard at all.  Some are hard because it is steep, but I have had steep where there were not loose rocks, but just boulders that were large, but not too large that was not that hard.  I have had hikes that are loose sharp rocks and steep and those are crazy and I turn around for it would be just crazy hard coming down. This was steep, but no nice boulders to make steps, and no loose sharp rocks.  This is just dirt for the most part that is steep.  So as I started climbing the last mile, I had to evaluate.  Is this too much for me?  I decided that I was prepared and I had my hiking sticks and I can do the four point system really well to help me down.  I also thought 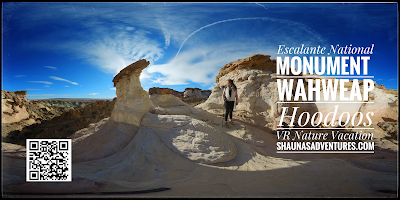 VR Nature Vacation Wahweap Hoodoos Escalante Wahweap HooDoos in 360 Degrees ESCALALANTE, Utah  Discovery of the White Valley Wahweap Hoodoos have fascinated both my husband and myself ever since our first trip here.  As we walked down the river bed to the Wahweap Hoodoos, we noticed a side canyon off to the left.  We have been curious about that canyon ever since.  So this year, we headed back to the Wahweap area to explore this other side canyon that leads to the White Valley. This was such a delightful area to explore, yet it feels very much like you are first time explores to this area, for there are few trails, and even though we searched like crazy, we struggled to find a path down into the White Valley canyon.  I think this area would be pretty rough to explore without my Gaia mapping.  By recording my trail, it helped me feel safe that I always had a path back out of the crazy maze.  Of course, it is dangerous to only rely on tech, so have a backup plan in case something