Bells Canyon Waterfall Hike in the Winter base of Little Cottonwood Canyon, Utah in 360 Degrees

BELLS CANYON WATERFALL at the BASE of LITTLE COTTONWOOD CANYON

< did this hike the first week in February.  I was expecting it to be hiking on a snow packed trail.  It was instead a lot of melted snow, so lots of puddles and slush.  I had my hiking sticks and spikes or Crampons on my shoes.  I was so extremely grateful that I had those.  People who did not were sliding all over a slippery steep trail and not enjoying the hike as much as they could have been.

The trail starts at the base of little cottonwood canyon.  It walks up switchbacks until it gets to the reservoir.  After about a mile up past that is when I started to think the trail got very pretty.  The cliffs on the left were very impressive.  Then it got steep climbing up a steep trail with lots of boulders and lots of pines on both sides.  I thought it was beautiful, but those who were not wearing spikes were dealing with a really scary section.  After that section the falls are only a little further.  Of course they were beautiful and the snow all around them made it super scenic.  Would happily do it again.  If I do it again I might bring waterproof boots and slide my spikes over top of them.  I had super waterproof Salmon shoes and my feet still got wet because there was just so much water.


You will notice the picture above there is more snow, for is it when I went up in February.

The picture at top is March/April.  The first time I went up, I did not manage to get my 360 images to work, so I gladly went up and did this awesome hike again.  I can't wait to do it again.
These cliffs are so much more stunning in real life.  They are just dramatic in how tall they are, and the color is a really pretty grayish white.  Picture definitely does not do it justice....You will just have to head up and see for yourself. :)

H
Above is a 360 Degree Walk around the Bell Canyon Waterfall.  in the above 36- I am down right in front of the waterfall.

My funny story about the spheres above.  I bought myself a 360 camera in December of 2017 and gave it to myself for Christmas (Silly me).  After Christmas, I pulled it out and tried so hard to figure out how to use it.  I got frustrated, and put it in the corner and told myself I was returning the thing for it didn't work with my phone.  I did this multiple times, and my husband was so tired of me continually pulling the thing out trying to figure it out that he was pushing me to get the thing returned.    But there was this nagging part of me that said that it could work, I just needed to figure out the missing piece.  In middle of February, I finally figured out a step, and being so excited I went to this pretty spot to film. Well I came back with lots of pictures that were a black rectangle with 2 circle 180 half pieces that were not connected.  When I tried to connect them they were painful to view.   My excitement was smashed.  I kept working on it and FINALLY figured it out.  I loved this canyon and wanted to do it right, so I deleted the bad images from Google, and went up to redo the hike a month and a half later. (That is why some pictures have tons of snow and others not as much.)  The problem is Google sometimes doesn't deleted things you added even after you said delete these, so after I connected this second hike, it decided to stick those bad pictures into the middle of some of the hike.  So if you walk very far in these spheres, you might be lucky (or unlucky) to find a sphere that was my first poor attempt at using a 360 camera.  :)

Video below is of the waterfall.  Just click on it for it to show.

Video below is the first view of the waterfall.  Just click on it for it to show.

The 360 Image below is what the trail looks like.

Below is a short video of the stream here in the winter.

Below is a short video of the stream here in the winter.

MOST IMPORTANT THING TO KNOW BEFORE YOU GO TO BELL CANYON

If you hike this in the WINTER, it is important to have some Spikes, or Crampons to slip over your hiking boots.  The trail gets so icy, for so many of the young teens slide down the trail making it super icy trying to get up.  If you have SPIKES/CRAMPONS and HIKING STICKS and dress for the weather, this hike is FABULOUS.  Just go prepared.  I would love it if you considered checking out the Spikes and Hiking Sticks here.  Every little penny makes it possible for more adventures to come your way.


If you liked this area and want to see more, click on the Link below 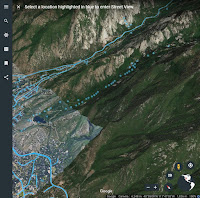 If you liked this hike, you will also LOVE
LISA FALLS
Link to Lisa Falls and Gate Buttress 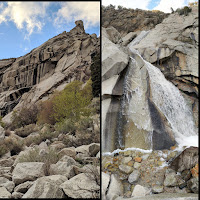 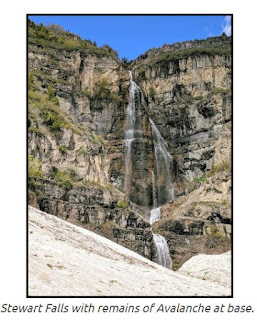 If you are enjoying these post, I would encourage you to look at the sponsor links below.  Even just the few pennies I get helps to keep more adventures coming your way.  The first link is these cool lights that look like a meteor or rain shower. Then awesome wall waterfalls that I am dying to install in my home, and last snowflakes.   They are all in honor of the beautiful snow that is falling outside my house as I work on this blog.  HAPPY HIKING!