Chesler Park in Canyonlands Needles district is a unique area formed by the land cracking in a grid like formation, and then the water eroding away the cracks in between leaving tall needle like columns, and mushroom shaped rocks clustered together.  If this analogy is compared to our life, and we come as a simple block, and challenges and hardships keep taking away from us, I hope I the end that we can stand as a magnificent interesting tower that has grown stronger from our difficulties.

Make sure you rotate this around so you can see everything.  The best way to watch this is by putting on VRHeadset and Transporting yourself here using YouTubeVR - ShaunasAdventures or using my Oculus Portfolio Link
https://creator.oculus.com/community/109816967492217/
Insta 360 Video of Chesler Park
I wish this photo showed how cool the area is behind my cute hubby.   You can see a section of Needles in the left background, but right off his elbow there is tons of mushroom shaped rocks with cracks between them.  Todd said it looked like what he imagined the Broken Plains would look from A Way of Kings by Brandon Sanderson.  Now that he said that, I would definitely agree.  We didn't go much further than this area of Chesler park, but this trail goes further called the Joint Trail or Chesler Park Loop, and you get down into some of these formations.  It is supposed to be quite something.
Storify Web Story

Tiny Planet Version of Above Video 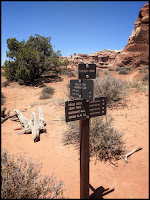 Here is the sign letting us know we actually made it to Chesler Park.  From here it is a launch to an even better trail called the Joint Trail of the Chesler Park Loop Trail.  The big things people enjoy about going further around this loop is that there is an arch called Druid Arch,( which looks exactly like the Druid Arch in Escalante so I wonder if you can also get to it from that end for there are trails on the opposite side) and there is a slot canyon that is so narrow that you have to take off your backpack and move through the slot sideways.
Here is the Trail map
Needles Trail Map
We didn't make it to Druid Arch, but Anne did, and here is her post on Druid Arch.
Annes trip to Druid Arch

Some of my Favorite Structures in Chesler Park 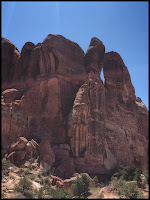 I loved this enormous tower column in Chesler Park

This is a section down inside the mushroom shaped rocks that are common in Canyonlands National Park Needles District.  The needles district was formed by the earth cracking into a grid like shape, and then water kept going down into these cracks and eroding away the earth in the cracks.  In some areas it left tall needle shaped columns, and others it looks like lots of mushroom rocks scrunched together, or like what you would imagine the Broken plains being like in The Way Of Kings by Brandon Sanderson.  As you get down into this section of  mushroom shaped rocks there are layers and layers of rock making unbelievably cool land formations.  My lesson I learned from this trail, is that if I apply this to people, and decide to not keep relationships superficial, but really get into deeper relationships you might find there are really interesting layers that are fun to learn about.  Hiking heals, get out and enjoy one of the less populated trails on my blog today.
Here is the National Park Service description of how the formations here were made.  There are also many signs around the Needles park with great visuals describing the process.
Link to the National Park service description of how the Needles district was formed.

Here is a 360 Video in one of my Favorite Sections where the Layered Rock is especially interesting.

Remember this is a 360 Video so you are in charge and you need to move around to see the interesting stuff.  Of course the best way to watch this 360 Video is by putting on a VRHeadset ,and watching it in YouTubeVR - ShaunasAdventures.

Because the Geological Surface is so fascinating here, the Tiny Planet Version is very interesting.  Here it is if you are interested in checking it out.

2D Video of Layered Rock Video if you Like That Better 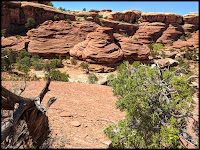 ELEPHANT MOUNTAIN
One feature to look for on the Chesler Park Trail is Elephant Rock.  It is near the beginning of the hike maybe a mile in, and it will be on your right.   I looked and looked to try and figure out how this rock was shaped like an elephant, and then I noticed on top a rock that does look like a cute little elephant.
HOWEVER...
I think this rock in Chesler Park with an Arch for a trunk looks even more like an Elephant.  It is just right of center if you are having a hard tine seeing it.

on the CHESLER PARK TRAIL

It was quite amazing the craftsmanship on this trail to make the many stairs along the way.  Some of them were work of art by some skilled people.  It makes areas that would have otherwise been rough to get through quite simple.  Still by the end it feels like you have been doing a StairMaster machine for quite a while!

This video is the entrance of the Chesler Park Trail.  It has a few sections on the trail where you are in a narrow slot and it is all dark around you, then you climb out to enjoy the brightness of the Sun.  In our crazy world, it is easy to have moments of darkness where you feel the craziness of our world crushing in on your soul.  It makes it hard.  Me to press forward to the light and not stay in the darkness, THE SON also is your brother who loves you dearly.  Both He and your Father in Heaven love you more than your earthly mind can co pretend and are urging you to press on, to remember them and communicate with them.  They want to be your support through this troubling time.  They are there, just open the door and let them into your heart and lives and they will hold your hand to lead you out of the darkness. Sending love from me to you to encourage you to work your way out of darkness when it comes.
Of course the best way to watch this video is by grabbing a VRHeadset and transporting yourself here using YouTubeVR-ShaunasAdventures.

Tiny Planet Version of the Video at the Entrance to Chesler Park Trail.

It is very fun to see this section from a birds eye view.

2D Version of the Slot Canyon and Stair Video

If you are enjoying this post, I think you will also LOVE my post on
RED CANYON
Link to Red Canyon
and you will also Love
ISLAND IN THE SKY- Canyonlands
Link to Island in the Sky Grand View Point

CREATURES and FAMOUS MOVIE STRUCTURES on the CHESLER PARK TRAIL

Mushroom shaped rocks that look like they are right out of Star Wars Movie. 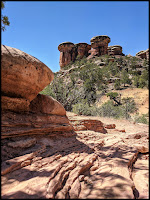 Things that I was so grateful I had while traveling

on the Chesler Park Trail